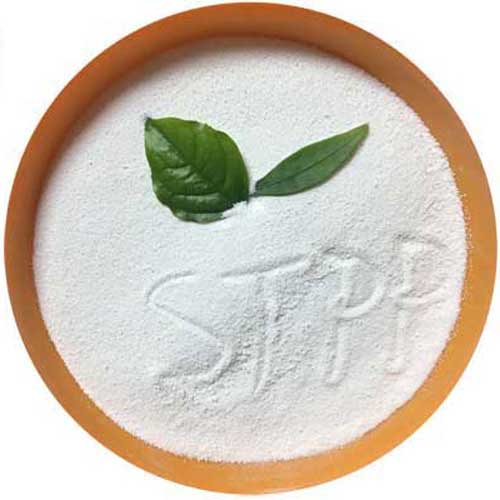 Sodium tripolyphosphate(STPP), also known as sodium triphosphate, pentasodium triphosphate is a kind of amorphous water-soluble linear polyphosphate in terms of its chemical structure. Sodium tripolyphosphate formula is Na5P3O10 and the molecular weight is 367.86. In appearance, it is white or colorless crystals, which flows well, dissolves in water easily. The aqueous solution is alkaline, the PH value of 1% aqueous solution is 7.9. STPP chemical is a widely used phosphate chemical, which can be divided into food grade and industrial grade sodium tripolyphosphate 94% depends on the uses. Both the two types, Chemate can manufacture and supply. Inquiry us to tell us your requirements now, quotation will be sent to you very quickly.

What Is Sodium Tripolyphosphate STPP 94% Used for

In daily washing water, there is usually hard metal ions, which will form insoluble metal salts with the active substances in soap or detergent to reduce the washing ability during washing process. So it is necessary to add something to detergents to make the metal ions contained in the washing water into harmless substances. (1). The buffer function of sodium tripolyphosphate stpp has strong chelating effect on metal ions, which can eliminate the adverse effect on washing. (2). In addition, it can captures the metal components contained in dirt and acts to dissociate the dirt during washing process. (3).It has the effect of swelling and solubilizing the protein in dirt, as well as dissolving the gel. (4). It can also promote the emulsification of fat and disperse solid dirt. (5). Meanwhile, it has the effect that prevent powder-detergent from agglomeration and keep it dry and granular.

STPP chemical, as water retention agent, quality improver, PH value regulator, metal chelating agent, can be widely used in dairy food, meat food, baked food, flour food, seasoning food, etc… It should be noted is that as food additive, it has strict requirements on the amount of use. Compared with industrial grade STPP, the food grade sodium tripolyphosphate has more stringent requirements and more inspection and monitoring programs in producing. The raw material for the production of STPP food grade must be food grade or genuine products, ordinary industrial grade products can’t be used, such as, it must use genuine thermal phosphoric acid, not wet-processed type, even the orthophosphoric acid is food grade.

Sodium tripolyphosphate (STPP) is often used as scale inhibition in cooling water treatment. For that, small amount of polyphosphate added to water can effectively destroy the normal growth process of calcium carbonate and other crystals. So as to prevent the formation of calcium carbonate scale. In addition, it is also one of the commonly used corrosion inhibitors for cooling water. Adding it to water in the proper concentration can prevent or slow the corrosion of water on metal materials or equipment.

STPP is quite stable at room temperature, but will slowly hydrolyze in moist air, and produce sodium orthophosphate eventually. Sodium triphosphate also has complexation with metal ions in water to form soluble complex compound.

The aqueous solution of sodium tripolyphosphate is weakly alkaline, and it can form suspension in water with PH value from 4.3 to 14.  This can be called dispersion effect. It can also make liquid and solid particles be better dissolved in the liquid medium and make the appearance of the solution is completely transparent. This is solubilization. Because of its unique properties, sodium triphosphate is an important ideal material in detergents.

Anhydride are usually divided into high temperature type (Ⅰ) and low temperature type(Ⅱ). It is mostly white crystalline or crystalline powder in appearance. The relative molecular mass is 367.86, the relative density is 2.49 and the melting point is 662℃. It is gradually hydrolyzed in an aqueous solution to form pyrophosphate or orthophosphate. STPP chemical has complexation of alkali earth metal and heavy metal ions, and can soften water. It also has the ion exchange ability and strong dispersion, which can make the suspension into solution. Type Ⅰ has larger hydrolysis velocity than Ⅱ, so type Ⅱ is also known as slow hydrolysis type. Type Ⅱ can be transformed into type Ⅰ at 417 ℃.
Hexahydrate is white prismatic crystal of trisoclinal orthogonal crystal system, which can be weathered and has a relative density of 1.786. The melting point is 53℃. It can be decomposed during recrystallization. Even if sealed, it can still decompose to sodium diphosphate at room temperature. When heated to 100℃, it can be decomposed into sodium diphosphate and sodium phosphate. Therefore, hexadydrate type sodium tripolyphosphate are not easy to keep.
Industrial grade sodium tripolyphosphate is actually the mixture of type Ⅰ and type Ⅱ. For that, type Ⅰ has fast dissolution rate, and has large thermal effect when hydrated to form hexahydrate, which is easily absorbed in the atmosphere and clumped with moisture. Type Ⅱ is slower in moisture absorption and less prone to clumping. Therefore, the content of type Ⅰ sodium tripolyphosphate uses in detergents shouldn’t be too high, generally controlled at 10-30%.

The Production Process of Sodium Tripolyphosphate

The process of preparing phosphoric acid from neutralization liquid is different, but it can be roughly divided into two categories. One method is to dry the neutralized solution in a spray drying to a certain particle size of orthophosphate, and then condense into sodium tripolyphosphate stpp. The other method is that sodium tripolyphosphate can be made directly from the neutralizing solution. The former can be called a two-step method and the latter can be called a one-step method.
Production Process Flow
Phosphoric acid is sent to the storage tank of the pentasodium process from the phosphoric acid process for storage. And the caustic soda is sent to the storage tank of the pentasodium triphosphate process from the large storage tank for storage. During production, phosphoric acid and caustic soda are added to the neutralization stirring tank in proportion, and adjust the valve opening for the preparation of the crude neutralization liquid according to the reaction situation and the ratio of acid and base. After the analysis of the neutralization solution is qualified, add ammonium nitrate to the stirring tank. After the ammonium nitrate is completely dissolved, the neutralization solution is put into the pump tank and transported to the neutralization solution storage tank through the neutralization liquid pump. After the qualified neutralizing solution is removed from the neutralizing solution storage tank through the filter, it is pressurized into the polymerization furnace by a high-pressure plunger pump. Then it is atomized by the pressure nozzle, and meets the heat source provided by the gas burned of the gas burner, dried and polymerized to form the finished product is pentasodium. Then pentasodium enters the cooling drum from the polymerization furnace for cooling. Then sent to the entrance of the fourth-floor screw conveyor by the screw conveyor, and then the screw conveyor is evenly fed to the rolling screen or cascade crusher. The qualified pentasodium through rolling screening or cascade crushed pentasodium enters the finished product bin, and the coarse material screened by rolling screening enters the crusher and is crushed by a screw conveyor and sent to a bucket elevator. Then the screw conveyor is used to feed the rolling screen uniformly to pulverize and screen the large materials. The pentasodium in the finished product bin is packed and sent to the pentasodium product warehouse.

Chemate Company is a one-stop phosphorus chemical products supplier integrating researching and development, production and sales. Our main products include phosphoric acid, sodium hexametaphosphate, trisodium phosphate, sodium acid pyrophosphate, dismmonium phosphate, etc., which serve the food processing industry, fertilizer industry and other various types of industrial fields. Since the establishment of our company, we always provide perfect service to our clients with excellent quality and reasonable price. After a long time of hard work and persistent pursuit, we have won a good reputation in the industry and got high praised from our customers. After years of continuous development and progress, our products have already exported to many countries all over the world and we have established a long-term stable cooperation relationship with our clients. If you would like to purchase this kind of products, please free free to contact us for price. We guarantee to provide you with the high quality sodium tripolyphosphate (stpp) 94% chemical.

The price of sodium triphosphate for sale in the market usually vary depending on the price of raw materials. So whether you are our old customer or new customer, please contact us directly to get the latest price. We can assure you that our prices are absolutely the best and most competitive. Get price online now.