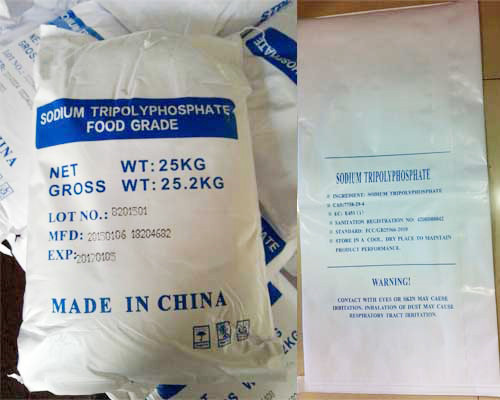 In food processing industry, sodium tripolyphosphate（STPP) is mainly used as quality improver in canned foods, dairy products, fruit drinks, soy milk, etc., used as the water retaining agent and tenderizer for ham, luncheon meat and some other meat products. In the process of aquatic products, it can play the role of water retention and tenderization, as well as swell and bleach. It can make the beans soften in canned broad beans. In addition, it can be used as water softener, chelating agent, PH adjuster, thickener and used in beer industry.
Sodium hexametaphosphate（SHMP) can be used as quality improver, PH regulator, metal ion chelating agent, binder and swelling agent. It can stabilize the natural pigment and maintain the color in some cans and fillings. In cans, it can also emulsifies fat and keep the texture even. It is also be used in the meat cans and meat products to improve its water retaining performance and prevent meat metamorphism. Be added to the beer to clarify the liquor and prevent turbidity. Like STPP, it can also be used as water soften and play a role in water retention, expansion and bleaching in aquatic products processing.
The food grade phosphoric acid can be used as sour agent, nutrient leavening agent, as well as special water retention agent for bread baking and canned fruits and vegetables to inhibit microbial growth and extend shelf life. It can also be used in beverages, juices, cocoa products, cheese and cooking oils. In addition, it can be used with antioxidants, which can prevent oxidative rancidity of animal fats.
Trisodium Phosphate(TSP) is mainly used as buffer, emulsifier and nutritional supplement in food processing industry. It can be used as the raw material for alkaline water to prepare pasta. Also be used for saccharification and starch production. Used as detergents for edible bottles and cans.
As an important additive in pastry making, sodium acid pyrophosphate(sapp) is mainly used as fast fermentation agents, quality improvers, leavening agents, buffering agents, chelating agents, rehydration agents and adhesion agents. Used for the acidic components of synthetic leavening agents, the time of carbon dioxide production is longer, so it is suitable for less moisture content of baked food. In addition, it can be used with other phosphates as water retention agent in the processing of cheese, luncheon meat, ham, meat products and aquatic products, as well as rehydrating agent for instant noodles.
Would like to know more about these food additive? You can visit the product detailed pages to check more or feel free to contact us directly for more.