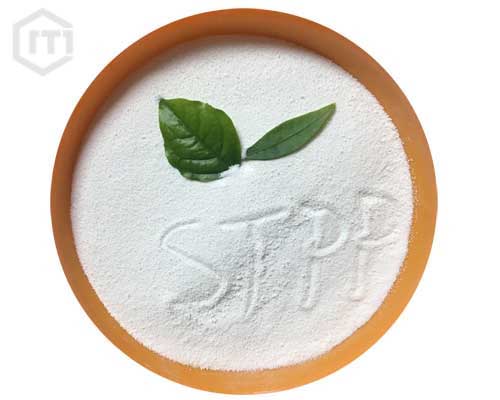 Know About The Functions of STPP in Detergent Powder

In the process of detergent slurry preparation, controlling the hydration of pentasodium is the key to controlling the fluidity of the slurry. Usually pentasodium reacts with water to form hexahydrate.
Na6P3O10+6H2O→NA2P3O10.6H2O
We hope that the pentasodium added in the slurry has enough hydration, so that the finished powder contains more crystal water, which isn’t easy to absorb moisture, not easy to agglomerate and has good fluidity. However, it is now appropriate to control the hydration of pentasodium. Otherwise, it will form hard lumps, which will affect the quality and operation. If the crystals are finely crushed, it will increase the viscosity of the slurry and affect the fluidity, which will bring difficulties to the operation.
When pentasodium dissolves in water, its solubility has two cases. One is anhydrous pentasodium, which can dissolve 35 grams of pentasodium in 100 grams of water at normal room temperature, this is usually called instantaneous solubility. The other is that with the continuous increase of time, the solubility of pentasodium to form hexahydrate compounds decreases with it and finally reaches the equilibrium concentration of hexahydrate compounds, this is usually called the final solubility. In slurry, the solubility of pentasodium is more complex due to the presence of other inorganic salts and the difference in total solid content. In fact, the amount of pentasodium dissolved in the slurry is relatively small. The solubility is also related to the PH value of the medium. When the PH value is high, the solubility is small, and vice versa. If pentasodium dissolves too much at the beginning, and then gradually precipitates hexahydrate, it will tend to make the crystals become finer, which will increase the viscosity of the slurry, thereby reducing the fluidity of the slurry.
We usually see two types of pentasodium, namely anhydrous Na5P3O10 and hexahydrate NA5P3O10.6H2O. Anhydrous pentasodium is divided into high-temperature type (type I) and low-temperature type (type II) due to the different generated temperature, which have the same chemical composition, but have different crystal structure. Both type I and type II anhydrous pentasodium can form the same hexahydrate Na3P3O10.6H2O. Under the same conditions, the hydration rate of type I is fast and there is no induction period, while that of type II is slow and generally there is induction period. They release heat during hydration process, and type I is much higher than type II. In practical use, type I and type II are usually used in combination. Generally, it requires less type I content, so that the hydration is slow and won’t agglomerate, which is convenient for operation.

The aqueous solution of STPP chemical powder is relatively stable at room temperature, but it cal also undergo hydrolysis reaction slowly. With the decrease of PH value, the increase of temperature, the change of concentration and the increase of time, the hydrolysis rate will be greatly accelerated. The result of the hydrolysis is eventually form disodium and monosodium.
Na5P3O10 + H2O → Na3HP2O7 + Na2HPO4
Na3HP2O7 + H2O → NaH2PO4 + Na2HPO4
If the time from ingredient to spray is short, the amount of hydrolysis of pentasodium in the slurry won’t be too much. If the slurry is stored for too long, the amount of hydrolysis will increase.
Under normal circumstances, the hexahydrate of pentasodium is relatively stable. But when the temperature is more than 100℃, it can remove five molecules of crystal water to form a monohydrate compound, and the last molecule of crystal water isn’t easy to remove, which will decompose if it continues to be heated for a long time. Therefore, the indredients and spray conditions should be strictly controlled in production process. The heating time of physiology shouldn’t be too long, at least one molecule of crystal water should be remained in the pentasodium molecule, so as to increase and stabilize the water content in the finished detergent powder.

STPP chemical has a strong complexing ability for calcium and magnesium metal ions dissolved in water. After complexing, soluble complexes are formed, so that the hardness of the water is softened, carbonates and calcium soap are easily dissolved. In addition, it can also capture iron ions, remove inorganic dirt, as well as complexes heavy metals such as copper and manganese ions. Therefore, the detergents mixed with STPP chemical is also suitable for washing in water with higher hardness, which improves the scope of the detergent to the washing water.

Sodium tripolyphosphate is an inorganic salt and an inorganic surfactant. So it has the general characteristics of surfactants, and has strong effect of dispersion, emulsification and gelatinization on fine inorganic particles or fat droplets. Mixing stpp in detergent can improve the suspending ability of the dirt, so that the dirt detached from the clothes will condense with each other and will no longer be deposited on the clothes. Meanwhile, like other inorganic salts, it can reduce the micelle concentration of the active substance and greatly improve the washing effect.

STPP chemical has the property of weak alkalinity, the PH value is 9.7. It can adjust the PH value of the medium, and has good buffering effect in the range of PH value.