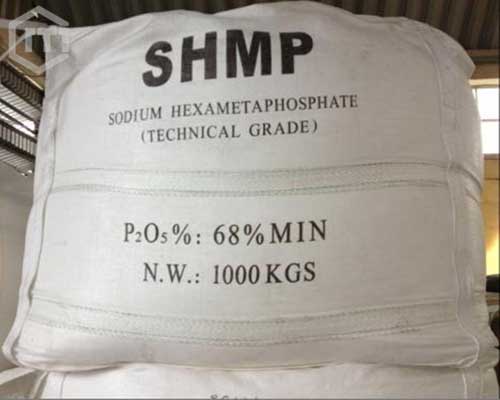 Sodium hexametaphosphate is a transparent glass flake or white powdery crystal, which has strong hygroscopicity and is easily soluble in water. It has high solubility in water and has a wide range of industrial applications. For example, it has the ability to generate soluble complexes for certain metal ions (calcium, magnesium, etc.), so it is widely used to soften water, such as high-efficiency water softeners for cooling water treatment in power stations, locomotives, boilers and fertilizer plants. It has a wetting effect and is used as a detergent additive. It is used as a preservative and stabilizer in the food industry. In the petroleum industry, it is used for rust prevention of drill control pipes and to control the viscosity of the mud when drilling. In the construction industry, it is used to make water treatment agent and cement hardening accelerator. In metal processing, it is used as a metal surface treatment agent and wetting agent, and there are many other sodium hexametaphosphate uses.

Use in Printing And Dyeing

1.Used as water softener, so that dyes and soaps will not precipitate or agglomerate. There are many ways to soften hard water, which can generally be selected according to the water hardness and specific conditions. The principle of using sodium hexametaphosphate to soften hard water is that the calcium ion Ca++ or magnesium ion Mg++ that causes the hardness in the water enters the sodium hexametaphosphate molecule and becomes a very stable soluble condensate(Na2 (Ca2(P03)6) and Na2 (Mg2(P03)6)). The Ca++ or Mg++ in this complex isn’t easy to escape, so it won’t cause Ca++ or Mg++ to precipitate or agglomerate when encountering dyes or soaps, which can save dyes and soaps, also can achieve the effect of water purification. 2.Prevent sodium alginate from precipitation when meeting calcium. Sodium alginate slurry is the most suitable slurry for reactive dyes, but care should be taken to prevent sodium alginate from penetrating into hard water calcium during manufacture to form calcium alginate. 3.As a scouring aid, when the nylon strand is scouring with soap and soda before dyeing, sodium hexametaphosphate is added to prevent the soap from consuming hard water and improve the scouring effect. 4.Treat recycled water. In the circulating water, due to the addition of sodium hexametaphosphate to reduce the hardness, it is not easy to produce calcium carbonate deposits and avoid blocking the water pipe. 5.Treat boiler water. Sodium hexametaphosphate can also be used to treat hard water in the furnace, which can not only avoid the generation of scale, but also re-dissolve the generated scale, but the price is higher than that of trisodium phosphate. 6.As ingredients of synthetic detergent. Sodium hexametaphosphate is an important ingredient in synthetic detergents (such as sodium alkyl sulfonate, sodium alkyl benzene sulfonate), because it has good water softening capacity and washing capacity.

SHMP Chemical as an additive in drilling mud can prevent the precipitation of polyvalent metals, improve the salt resistance of mud, and reduce mud loss. In addition, a certain amount of sodium hexametaphosphate is dissolved and injected into the water pipe to form a film on the pipe wall to prevent corrosion of the pipe.